Despite skipping training on Wednesday morning, Arsenal attacker Gabriel Jesus has been cleared to play in Thursday’s Europa League match against Bodo/Glimt, according to a report. 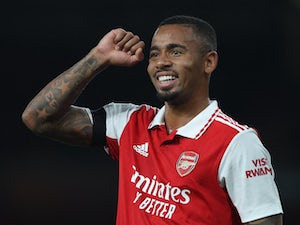 Since joining the Gunners for £45 million from Manchester City in the summer, the 25-year-old has been in fantastic form, tallying five goals and five assists from 11 appearances across all competitions.

As Mikel Arteta’s team maintains its lead at the top of the league, Jesus has started each of Arsenal’s nine Premier League games, including Sunday’s thrilling 3-2 victory against Liverpool.

Kostas Tsimikas accidentally elbowed Jesus in the face during the match, and both teams’ players instantly expressed worry as the striker lay flat on the ground.

The Brazilian international was finally given the all-clear to resume playing after receiving treatment, albeit he was substituted for Eddie Nketiah in the closing minutes.

Prior to their trip to Norway, where they hope to make it three wins in a row in the Europa League, Arsenal players trained on the London Colney fields on Wednesday morning.

Jesus was not among those seen practicing, raising concerns about a possible injury for the striker, although the Evening Standard reports that his absence was just preventative.

Oleksandr Zinchenko is also in doubt after missing Arsenal’s past two games with a new calf injury, and the source adds that the left-back is not anticipated to recover in time for Thursday.

Instead, for Sunday’s Premier League match against Leeds United, where Jesus is anticipated to lead the line following a midweek layoff, Arsenal will try to get Zinchenko back into the lineup.

The Gunners should make a number of changes in Norway, with the likes of Vieira, Cedric Soares, Reiss Nelson, Marquinhos, Albert Sambi Lokonga, Rob Holding, and Matt Turner hoping to make a comeback to the starting lineup.

Despite having played one fewer match than Kjetil Knutsen’s team, Arteta’s team presently leads PSV Eindhoven and Bodo/Glimt by two points in Group A.